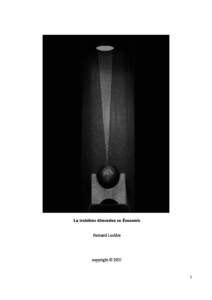 La troisième dimension en Economie
Abstract:
Written in the form of a novel, this book describes a research work whose starting point is a flattening of the basis of the economic system whose roots are anchored in the philosophy and physics of the 18th century and more particularly in thermodynamics. This basis is currently made up of two main dimensions: capital and labor and a residual dimension.
The research group is composed of people from different fields: physics, medicine, philosophy, economics and finance. Using a concept that crosses these fields, the group explores ways to develop a third dimension that is not simply residual. Their interactions and questioning lead them on a road in the middle of a maze of paths, a road that is wide at the beginning and that narrows as they progress.
In a world where there is an exacerbated competition between two systems opposing the interests of the individual and the State, between the partisans of growth and the partisans of degrowth, between capital and labour, between the American and Chinese systems, between the schools of economists, there is another way.
This path does not involve a revolution, but an evolution, a new synthesis based on new measures of the market and of the GDP, as well as on a new monetary tool.

Time is money.
What is the relationship between time and money?
What is time?
In its relationship with money, time takes the form of interest rates that are calculated on an annual basis and then broken down into days, hours, … i.e. the Geenwich mean time (GMT) or UTC which order the cost of distribution, the cost of movement of money.
What if money was given another basis than the Greenwich meridian?
What is money?
Money has a mass that has several forms depending on its degree of liquidity: from the most liquid, the most mobile, i.e. M1, to the least liquid, the least mobile: M3. What other measure could serve as a basis for the monetary mass? Instead of the Greenwich meridian, the basis would be the motor that allows the economy to grow, i.e. productivity. The mass of this engine would take the form of security tokens grouped in a new mass: M4. The mobility of M4 would be anchered in the market of security tokens.
In view of the uncertainties surrounding what is currently the residual dimension of the economy and in an era of the increasing digitalization of human activities, M4 would, under certain conditions, be a more manageable alternative to the current residual factor and become an important basic, central factor of production alongside labour and capital. Provided that the method of measurement of the securities market be reviewed. The current method is based on the actuarial valuation of future corporate profits which depends on interest rates, i.e. the Greenwich meridian. Instead, the proposed method of measurement aims to match the economy, corporate profits and companies: corporate profits being assessed on the basis of their statistical relevance and companies according to their ability to create value and not just their ability to extract value.
copyright © 2021